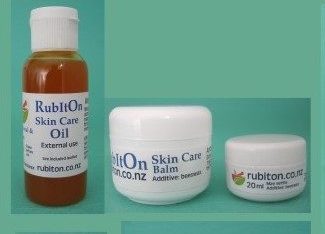 The latest in our long line of basic family care. We have kept the oil base which acts as barrier, emolient and moisturiser.

RubItOn is fast acting. A power weapon against staph, other infections, acne, burns, bites  and in diabetic care. Has been used for nappy rash and protection against it. Mild rosacea has been tamed. Rubiton Skin is proving effective in conjunction with RubItOn Skin Light for the management of psoriasis; eczema similarly.

May be used on a dressing, applied directly from bottle or spread by hand.

Dosage is minimal. We have rejected many oils for their side effects and the ones used are the least concerning. We believe RubItOn Skin Care to be safe for use during pregnancy and lactation. There is more argument about its use on cats and dogs than mothers. Anyone in doubt should consult their qualified carer. More detailed information is on this site to help their consideration.

We have tested the products on us--even in our eyes. We have no control over  outside use so cannot give any guarantees as to any outcomes or accept any liability whatsoever attributed to any use.

Black cumin seed oil adds a powerful antiseptic and anti-inflammatory. Recommended by the Prophet Mohamed as "curing everything but death". We don't go that far. But RubItOn can quickly alleviate pain on wounds and should be in every home and tradepersons toolbox.

Sea buckthorn fruit oil has 190 ingredients on its own. Full of anti-oxidants including vit. E . Supplies the needed omega 7 for new skin formation.

Tea Tree oil (Aus.) was once our preferred antiseptic. Others have bettered it but  it remains to help against itching.

The  carrier oil, rice bran, includes  a natural preservative. Beeswax is used in both the balm and liquid as thickener. Everything is either certified as therapeutic or food grade. We have not sought out organics as they would have put the products out of the market. RubItOn has proven too useful to artificially restrict its distribution.

Sweet orange oil, itself an antiseptic, is used as a safe fragrance modifier.